Okay, Weenies. This is bugging me. 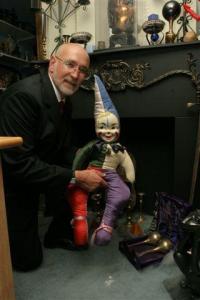 Okay, John. Just step away from the clown. Pic: feardance.com

I mean I really want to know.

So when the Haunted Collector (John Zaffis) takes the negativity-infested items away and brings them back to the John Zaffis Museum of the Paranormal (located in his HOME, aaaaaaaaaaaaaaaaaa), why doesn’t he get haunted?

Seriously. What, putting it under that glass thingie is going to keep the haunted watch or haunted garter or haunted Triscuit or what-have-you from excreting bad spirit juice into the ether?

If that’s what does it, why not just bring a glass thingie to the person’s house and give it to them? They’d have a hell of a conversation piece, anyway. “Guess what! The shit under this glass is HAUNTED.”

By the way, I think John Zaffis is hawt. John and Weenie: try getting that terrifying image out of your mind. Juuuuuust try.

Aweenielife.com is proud to announce the launch of Weenie Watch, a list of upcoming movies from various genres including thrillers, horror, sci fi, steampunk and fantasy.

Movie release dates along with review and info links can be found in the home page sidebar.

Check back frequently for new movie updates…it’ll be a scream!

Will Halloween 3D Be Axed in Favor of a Remake? 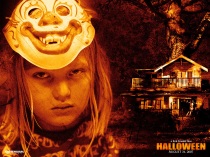 Thank you sir, may we have yet another? Photo: fanpop.com

According to bloody-disgusting, the long-awaited Halloween 3D, which had been put on the back burner, could be headed for the permanent chopping block after all.

But there’s a new possibility: rather than permanently scratching the movie idea, there may be a remake (we’re thinking probably not for 2012, though). Decisions, decisions.

In the linked article, B-D put forth a good question: which is better, the 3D or an entirely new remake (“new remake” sounds redundant, doesn’t it)?

I’m good with the original Halloween myself. It’s iconic in so many different ways and I just don’t think that particular feeling has been recaptured yet. But I admit if a new Halloween comes out, I’ll probably be grabbing a seat and a feedbucket size pop corn.

What do you think, my Weenies? Is it a severed thumb up or down for a new Halloween?

Aweenielife.com is live…but in a good way! You’re redirected to a really odd URL as GoDaddy is laying its issues on me (what a drag). But you’ll get there.

Aweenielife.com will feature movies, news and Halloween sales and deals.

Here we are. Boo!

Thanks to halloweenforum.com for bringing this to my attention.

Heads up (yar har): the page looks very non-pro, but I felt the haunter, Dave Dankanyn, had some interesting things to say.

Dave is also the host of Youtube channel Dead With Dave.

Aaaaaaaaa! (But it’s a Good Aaaaaaaa.) “The American Scream”

Here’s the info from chillertv.com:

From the same director/producer of the critically-acclaimed hit documentary Best Worst Movie (2009) comes The American Scream: an unconventional look at the Halloween cultural phenomenon of homemade haunted houses, and the enthusiasts behind the scenes.  Filmed in the sleepy enclave of Fairhaven, MA, The American Scream follows the creative minds behind three local homemade haunts and their spirited, passionate and sometimes harrowing efforts in igniting their town’s Halloween spirit each year.  Slated for an October 2012 premiere, The American Scream is produced by Meyer Shwarzstein of Brainstorm Media and Michael and Lindsay Stephenson for Magic Stone Productions; Michael Stephenson directs.

Get out your popcorn, your voodoo doll and your laptop to take tons of notes, I think this is going to be fun.

Please note that the following is not a professional, commissioned review. It is the opinion of the author of this blog.

It’s a true story–partially. Blood Countess weaves the exploits of real-life historical figure Countess Elizabeth Bathory of Hungary with those of her imaginary descendant, Drake Bathory-Kereshtur. The finished work is amazingly lyrical, considering the horrific content.

Elizabeth is a very kinky girl, the kind you won’t bring home to mother, but especially won’t bring home to your younger sister. That’s because the Countess is rumored to have killed more than 600 virgins during the late 16th century. She then bathed in their blood as a charm against her flagging youth. It didn’t work; the Countess is also rumored (and, four hundred years later, pretty much guaranteed) to have died. Before she did, she left a trail of sexual conquests, some fabulous and others fatal.

Be warned: if you’re not into iron maidens and sex that goes “ow,” this book is not for you. If you are–or if you’re into some really, and I mean really, superb, lyrical writing–it is. Give this book a shot. Whether you’re a history buff, fascinated with the sociopathic mind or just plain curious, Blood Countess is guaranteed to stir your emotions and run chills along every available body part. A must-read for the horror buff and modern-day vampire.

I Am So Addicted to This Vlog

I HEART the Bloodshed Brothers’ Youtube channel. Heart, heart, heart. (In an evil and very Halloween-ie way, of course. But yeah. It’s love.)

They look so innocent.

Synopsis: twin brothers Zach and Jeromy have inherited a love of Halloween from their mother and today, build a very cool mega haunt in SoCal called Field of Screams.

They’re documenting their progress daily, which is cool (and hilarious) enough (these dudes really should do standup – they’re like a unisexual George and Gracie).

In addition, they put in tidbits about holidays, girlfriends, swearing, driving their tiny dogs nuts, driving their parents nuts, picking through other people’s stuff (eew), and more.

Go Zach and Jeromy! Keep vlogging. And I love your haunt, dudes!  Check them out, Weenies. 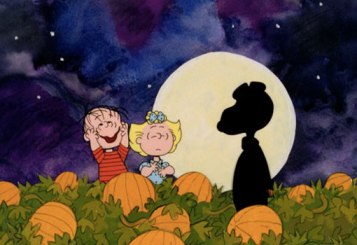 It’s the Great Pumpkin, Charlie Brown first aired the year before I was born. So it’s as as much a part of my being as hazel eyes, short stature and an unnatural and disturbing love of the run-on sentence.

But tonight when I forced my children to enjoy the show with me (“Love this show, dammit! Looooooooooooove it!” “Yes, Mama”), for the first time, I watched with a critical eye.

I don’t know why I never saw this stuff before…but that cheery little program is a neurosis in the making. More than one, actually. (That would be “neuroses,” wouldn’t it?) God, no wonder we children of the 70s turned out the way we did. Here are some highlights of this cartoon classic: 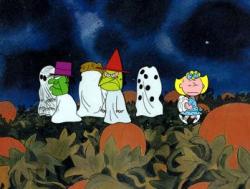 He got a rock. And much later, tens of thousands of dollars in psychoanalysis.

There’s one sense of human decency in this creepy childhood classic: Lucy goes to retrieve the shivering, sleeping, emotionally crushed Linus from the pumpkin patch (after she’s made sure she had all the fun she wanted first).

Yep, amazingly, cranky old Lucy wraps a blanket around Linus and puts him gently to bed. Maybe because, per the Schulz formula, grown-ups are conspicuously absent. (CPS, anyone?) What a sweet story! I need a drink.

But heck. It’s tradition. Folks, this year, come trick-or-treating at my house. I promise not to throw any rocks at you.

p.s. You all know this was a joke, don’t you? I absolutely full-on heart It’s the Great Pumpkin, no matter how many chronic bed-wetters its themes have almost certainly produced during the past 45+ years. Go Great Pumpkin — can’t wait for it to air this fall!

I LOVE this site. I love the peeps. I love the amazing tutorials. I love Larry, the admin guy dude thingie (not sure exactly what you call that position).

If you’re addicted to haunting or just like to stalk other people’s haunt ideas, check HalloweenForum out.

Too damned cute. So full of awesomeness. Visit them.

Posted in Very Weenie Blogs and Vlogs | Leave a comment